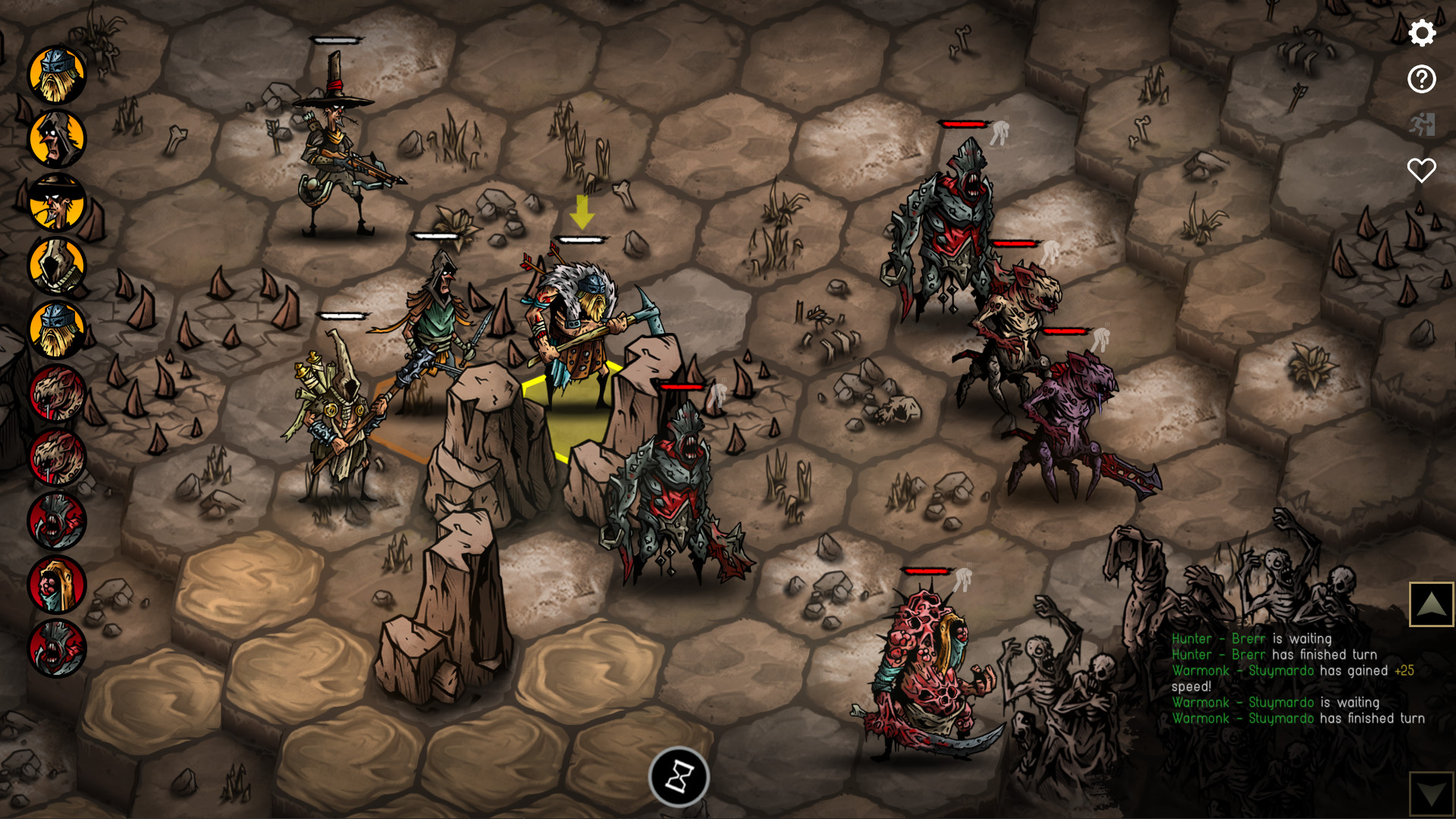 During combat, every unit generates a special resource called ‘Focus’. Focus is accumulated whenever a unit deals or receives damage, uses an ability, or shields another character. When the Focus bar is full, a powerful ability is added to the Focus Pool. This special ability can be used by any character on the battlefield during its turn. There are also other bonuses associated with reaching maximum Focus. For example, a character may heal, or gain a critical hit or life-leeching for the next attack.

Some items, like chainmail, helmet and shield grant the armour protection attribute.

When the enemy strikes an armoured character, he may mitigate the damage, receiving only half, and counter negative status effects. On each attack, armour protection is reduced by a certain amount depending on the attacking weapon’s armour pierce attribute. Once armour protection reaches zero, it will be pierced through and incoming negative effects will be applied.

When a melee attacker hits its target, any allied ranged unit may fire on that target afterwards (when in range, LoS is not obscured, and there’s no chance of friendly fire). This is called ‘Ranged Support’.

A few different abilities and traits grant ‘Shield Ally’. When one unit shields another, all damage and negative effects are nullified.

‘Attack Assistance’ is another kind of support prompting adjacent melee allies to also strike your target after a melee attack, provided they have available stamina.

In Urtuk, a critical hit only occurs when a specific condition is fulfilled.

Aside from an ability granting one, a critical hit will trigger in these two cases:

– attack on a slowed or stunned target

A critical hit is always paired with an additional effect. For example, the Engager class will leech life on any critical hit.

Counterstrike is a retaliation attack which automatically triggers (when active) each time a character blocks or nullifies damage.

This can occur as a result of armour blocking, Aegis, or shielding from an ally.

The game world is a place of pain, suffering and darkness, with a few low fantasy features. Urtuk is the name of the main character. His story begins with a harrowing escape from the Sanitarium, a deep underground prison where abducted commoners are used for medical experimentation. Urtuk escaped thanks to Eldric, an old friend from the world above.

The experiments conducted upon Urtuk in the Sanitarium have inflicted a mutation, a terminal disease. With each passing day, his health worsens…

Now he searches this blasted world for a cure. It’s only a matter of time before the mutation evolves to a lethal level and he will finally perish.

The game world has a primitive, grimy theme. There are no elves, dwarfs, dragons or other classical fantasy creatures. There are some light magical elements, but no overwhelmingly powerful sorcerers either.

Many centuries past, Giants roamed the world, living peacefully alongside humans until the war between the two species left the Giants extinct. Some years ago, a cabal of scientists discovered a process to extract the Life Essence of the ancient Giants from their bones.

This mystical fluid promised to cure many different diseases, mend grievous wounds, and perhaps even halt the aging process. Unfortunately, instead of improving the health of the subject, very often the serum would have the opposite effect, inflicting a mutation or lethal disease. Until the exact nature of this wondrous medicine can be determined, experiments on unwilling subjects continue. 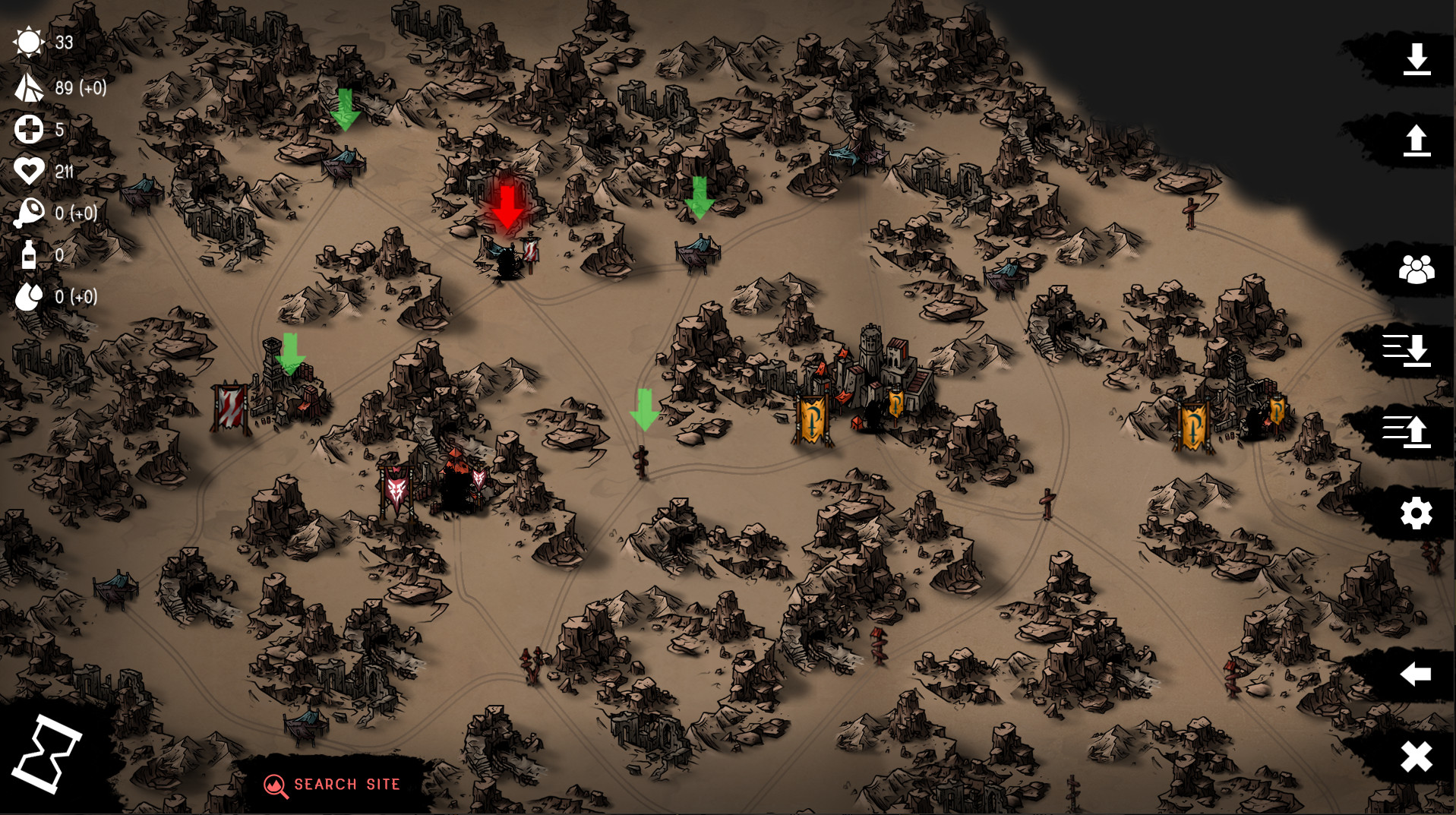 The player guides Urtuk and his party over a procedurally generated world map. Travel is similar in function to FTL, with various points of interest such as hideouts, camps and shops, all interconnected. The campaign features several biomes (zones) and the player needs to beat each zone until he reaches the final destination.

The ultimate goal of the game is to cure Urtuk’s disease by reaching the Ancient City in the last zone. Each zone has a specific environment and enemy types, and at the end the player needs to defeat the zone’s boss.

While adventuring, the player can recruit other characters into his party by completing quests, rescuing prisoners, as a reward for beating a map location, or by hiring them at a shopkeeper node.

When Urtuk’s party engages in an encounter or conflict, the game switches to the battlefield map.

There are both friendly and hostile characters in the world. NPCs can aid the player or point him in a new direction. We put serious effort into world locations for the player to explore – they are the key to discovering the path to Urtuk’s ultimate cure!

During combat, any party member can get injured or killed. When a player unit falls on the battlefield, he disappears from play and gets the ‘injured’ status. This can be removed by using medicine on the party screen. Medicine is a game resource and can be purchased at the Black Market. If an injured member dies again in a subsequent battle, he is dead for good.

The game ends when Urtuk is killed.

The world of Urtuk is dynamic. For example, if you engage a Scavengers camp, kill 3 out of 5 Scavengers, and leave to return later, only the remaining 2 enemies will be present.

Characters in the game have classic RPG stats like level, abilities, skills, HP and so forth. With each combat, party members gain experience and when they have enough XP, level up. There are many unit types to choose from, like tanks, damage dealers, support units, and disablers.

Each character can be equipped with gear like swords, armour, shields, helmets, etc. Class restrictions apply. Items may appear as loot after combat, or you may buy or find equipment in the world.

One unique aspect of the game is that after combat the player can extract various traits and abilities from fallen enemies and use them to upgrade his own members. These upgrades are not fixed; the player can swap the acquired traits and abilities between units as he likes. These special inventory items are called mutators. Mutators can be equipped outside of combat in the party screen. Up to 3 mutator slots are available for each character, granting many many different build options!

A mutator can for example add new effects to character attacks such as immobilizing enemies, or inflicting bleeding, poison or other status effects. Other mutators grant buffs or healing.

We have put tremendous effort into combat mechanics and design. The core of Urtuk is the battlefield, so we’ve included as many tactical fun factors as possible.

Combat is turn-based and takes place on a hexagonal map. Turn order is determined by the “Speed” mechanic (sometimes called initiative). Thus faster characters act more often than slower ones.

Each character can move and then execute an attack or use an ability.

Using an attack or ability typically ends the turn for the current unit.

As for the units themselves, we’re using a classic RPG class system.

For now, these are the available classes at the start of the game:

Each class has its own special ability (or more than one) and sometimes a passive skill. For example, the Guardian has ‘Bash’, utilizing his shield to push the enemy 2 hexes.

The tactical map has several different environmental hazards, like rocks, spikes and mud, which inflict a penalty when stepped on or bashed or pushed against. So if the Guardian bashes an enemy against a rock, it will be stunned for a turn.

Proper utilization of the environment is key to victory! We will talk about specific tile types later.

Another critical feature of the combat system is flanking:

If your character attacks an enemy while it is flanked on the opposing hex by a friendly unit, the attacker will gain an automatic critical hit.

Also if a character is slowed or stunned, any incoming hit becomes a critical hit.

As you can see, correct unit positioning is crucial to maximizing damage.

Always remember that the enemy AI will attempt the exact same dirty tricks as you, so be wary!