in the past two months we were hardworking on the game, and didn’t have any major updates to write about. Basically just adding more content, polishing, fixing and balancing.

Today I want to summarize what the state of the game is, well after 3.5 years of development.

The game is an party adventuring roleplay where you with the main character, Urtuk, and his companions, travel across a destroyed, hostile world and try to find the Cure for Urtuk. The traveling part is done in a semi open-world. Player controls a party on an overworld map and moves from node to node without any restrictions. The world consists out of 4 zones, and each zone is quite big, containing about 100 nodes to visit. In any zone there are moving parties – hostile or neutral. Those can be local bandits or some deserters from nearby army.. You can engage them in a battle or solve issues associated with them.

The movement in the world is done in turns. When you visit a place, you can encounter enemies to fight or reveal some special event. There are trading posts and black markets – places where you can find new mercenaries, equipment or other exotic resources like alcohol, medicine, etc..

The world is quite alive, and by each day (turn), there is something going on. We added a dynamic system which does affect the world and player can be involved! And by engagement, he can change quite a thing as the world progresses. As mentioned before, there is a global threat – Karwla. This is a hostile, savage species, beasts from Underground, emerging from the ground up, destroying anyone in the zone. Karwla will appear after some time in any given zone, so player has few time to stay.

We implemented new biomes for the world. Each zone has its own biome thus specific visuals and battle mechanics. 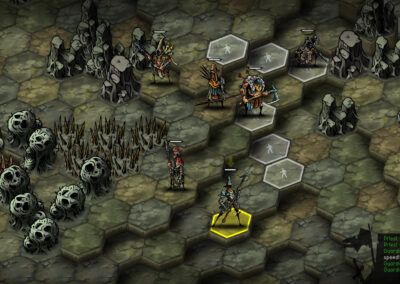 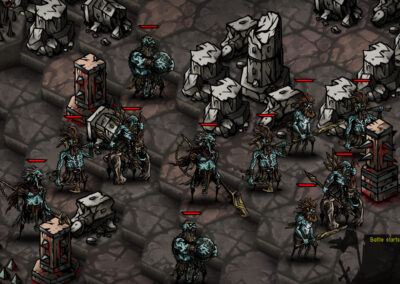 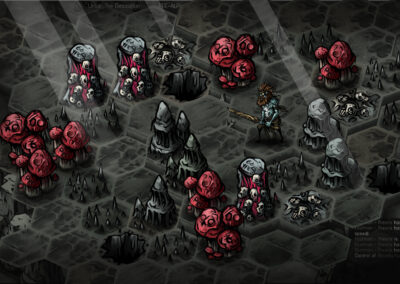 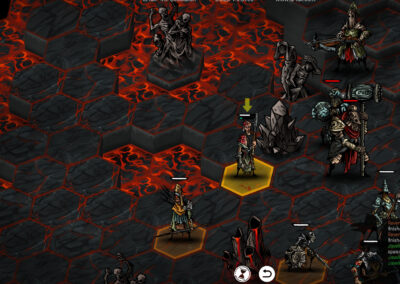 For example, in the Undergrounds (dungeon) there are ‘holes’ hex tiles which cause instant death when pushed into. In the Abyss, there is the deadly lava. In Swamps, you can find toxic mushrooms or growing poisonous thorns.. Of course, there is always a completely different enemy type in each biome. Along with bosses!

A very tough opponent in battles are the Karwla. They have powerful traits and can obligate player’s units in one good swing! But it is on the player if he really wants to fight them.

Character development – we already have added many mechanics which evolve as the player plays the battles. Just to summarize, each character has its own natural traits, unlockable traits (by level), unlockable traits (by “doing”, and we call them achievement traits), special traits – “Strong VS ..” (very powerful, but player has to find out what the character is strong against), then traits from Perks (can be found in the world). Also any unit on battlefield is prone to “stress”. If a given threshold of stress is reached, the unit will “panic” and loose 3 turns.

We plan to release another ‘closed beta’ build, so if you are interested, give us a shout, best place to join is our Discord – https://discord.gg/zeNfS9q

So stay tuned, as we are pretty close to an ‘early access’ build!